Today it has been over 4 months since the release of 3x64, and I regret that I have not yet found the time to write an article on how the entire release including the first updates and event went. And because in the light of current events in the world, like other developers, we had to reassess the releasing of new content (including postponing the Game Access event), I got an opportunity to rest and pay off my writing debt to you, the few loyal readers, with an article about the development of 3x64 from my personal perspective.

The Road to Release

First, let's go back to the end of September 2019. The release date was set for the 30th of September and most of the content was ready a few days before the deadline. However, because it was a preliminary date, I decided to push the deadline by one month after the test period to polish the game, even though the game was almost finished. If my memory doesn't fool me, it was our first game to get this kind of delay before the release - but as it turned out, it ended up being hugely beneficial. Suddenly there was no need for sleepless nights to make a lot of content at the last minute, but instead we could spend time talking to people on social networks, preparing the trailer and making last adjustments. The less hectic release was also much more enjoyable.

During this period, we were given the opportunity to present the game to the Czech gaming scene at the Poznań Game Arena as part of the Game Developers Conference. After accepting the offer, I set out for a 12-hour pilgrimage to the biggest gaming event I’ve attended to date. Despite a few hiccups that are probably unavoidable in any such event, I fortunately managed to resolve the issues on the spot, eventually also getting help from a colleague. The event probably played the biggest role in the success of the game’s release, as it introduced the game to new fans, but most importantly it gave us the opportunity to be in direct contact with the players who could try the game 14 days before the release, and the results were astounding. I am so glad that a lot of players found the game appealing, some even considered it one of the best presented indie games at the event. If I had to pick the most powerful moment of the whole 3x64 story, this event wins it hands down.

After returning from the conference, where I gained incredible amounts of energy from encountering players and developers, we had approximately 2 weeks before the final deadline. I spent some time addressing the most important comments that I received in Poland, but I mainly focused on marketing and preparing the release. A few days before the release, I could finally decorate our first ever Steam and itch page with a nice great trailer from a talented colleague Nomadiss and it, alongside some material for social media, was ready for release.

I spent time around the game release with my fellow game tester company colleagues, who also helped me greatly with tuning the game, and of course with the Lightning Soft members who are remote. Almost immediately after the release, I was delighted to see a number of very nice Steam reviews - mostly (but not only) from our Polish fans - and also a lot of nice results in the online leaderboards. As expected, we also received first bug reports and suggestions for improvements, which had to be resolved in the first update. We have been quite successful with the game on Steam and also here (the game was even mentioned by official itch.io Twitter, so thanks a lot!) , and the only overwhelming players' wishes were for a mobile version that we are definitely planning, but it is nowhere near ready at this time.

In November, there was another game event - this time the local Prague Game Developers Session, where the game also attracted new fans. The first update was out and because Christmas was coming, we decided to try (somewhat similarly to Warped Christmas) creating a Christmas event. The event development was a bit rushed due to participation in the Prague GDS, but in the end we managed to come up with and fine-tune the game mechanics, and the event was a success amongst our players. It also inspired us to prepare other interesting events - for me it is very fun to modify the core gameplay mechanics and create a game that feels different to play.

3x64 on the Game Developers Session and Christmas Event

Feelings After the Release

I often think back to what extent the game actually succeeded and what could have been done differently. I was really happy about how things went regarding the releas, we managed to find a lot of fans in a short period of time, who participated by playing before or near the release, and left nice reviews. In fact, the whole month after the release was unforgettable. There was a small problem with the arrival of the Christmas event, which I hoped would attract both previous and new players, but promoting the game some time after the release proved to be a bigger challenge than we were ready for. At release we did not find more opportunities to influence things in a better way - unfortunately most things were not in the team's capability, especially in terms of communicating with gaming news and review websites - I’m very thankful to Steam for the option to offer the game directly to journalists via the Curator Connect service. One thing I’d do differently is share information about the game and its development much earlier, regardless of whether the content is perfectly polished, because as development nears the end there really isn’t much time left for that.

As the previous paragraph suggests, the enthusiasm of the release period is not as strong anymore, as the game finds new fans rarely nowadays. However, we do not plan to slow down and I still have ideas in my head for nice events that I would like to realize, but also for several new features and modes that the game must unconditionally contain at some point. Unfortunately, in the gaming industry, one has to be accustomed to perpetually fight for recognition, but I believe that the new content along with the Android version, which will hopefully be released this year, will find its way to new fans. The current world events have slightly complicated things, delaying the plans for updates and events. But I think I can promise a new event associated with the #PlayApartTogether campaign, which should come very soon and will focus on eliminating threats, at least in-game :)

I must not forget to mention the biggest update so far, which added game replays you can view directly in the online leaderboards, along with a new simple game mode. Replays have been my dream right from the start, but it was a big task, so they came after the release - and I am very happy for it because I did not believe I could implement them, but in the end the biggest challenge after release was defeated :) I also managed to fulfill another one of my personal promises for the game since the release, and that is adding colorblindness modes, which seems to have been met with an even greater success than replays and the new mode - lesson for the future is that it pays to think of seemingly small groups of players.

Overall, I enjoyed both the 9 months of development before the release and the subsequent support and new features after the release, and I hope that other team members feel the same way. 3x64 became our first game published on Steam and itch and thus gained a very special place in my life story, and for this reason I would like to keep supporting the game for this entire year at minimum, and bring it into the best possible state in terms of the amount of content, hopefully offering more than other games in this genre. We will see how long the support lasts, it is tempting to go and try something new again, and the team already has some ideas. But only time will tell how things go :)

If you want to support us, you can try the game for 3.64 euros - I also want to thank everyone who already owns the game, and if you're playing 3x64 also on the Steam, I would like to ask you for a short review there. You can also contact us directly on our new Discord server, where we share updates and occasionally new features in development. I’m looking forward to seeing you! For those who stayed until the end, here is a small teaser for the upcoming event :) 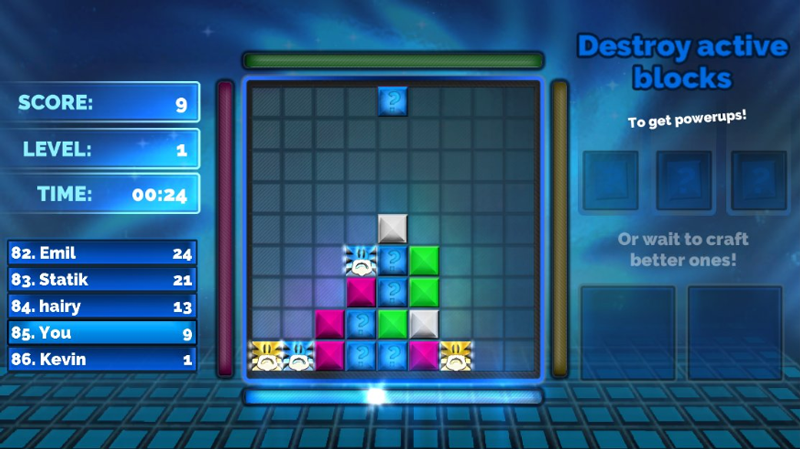